A Little Dodging and Burning will do. 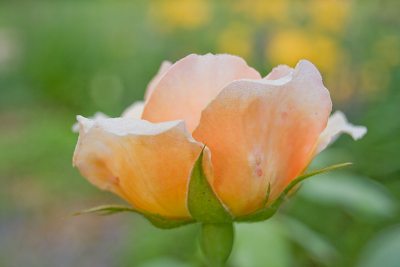 Here is an easy way to add just a little something extra to help an ordinary image become a little better. This first image is beautiful by itself but when I see it, I see the yellow in the background doesn't compliment the peach rose. Also the definition of the pedals isn't quiet enough. I'll use the dodge and burn method in a safe and easy way.
First off bring up your image in Photoshop or Elements and do all the retouching you feel it needs. I was going for a softer look with this image so when I retouched the rose I made sure the exposure wasn't too dark. Then I took out the blemishes on the petals and slightly painted over the yellow in the background. Next I added a new layer above the original layer and filled it with 50% gray. At the top of the layer box I changed this layer to Overlay. Once you do this you will be able to see your original layer underneath. Now grab your paint brush tool and choose a soft round brush with the opacity set to around 10 maybe even lower. Now make sure your colors are set to the default of black and white. On this new layer paint with the black to make areas darker and then go back and paint with the white to make areas lighter. You'll get the hang of it pretty fast and what is really nice about this method is.....if you don't like what you are doing then simply fill the layer back in with 50% grey and start again.
Now that you have that down......try  painting with another color. Have fun! 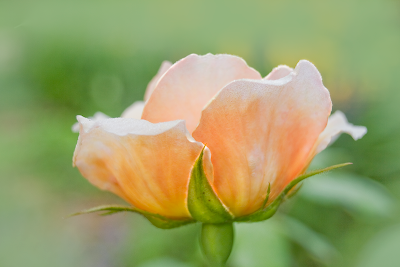 The loss of ceramic tiles 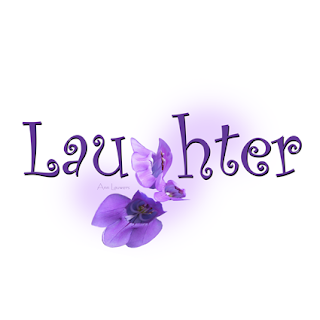 For years now I've been able to sell ceramic tiles with my images on them. The mainly consisted of words composed with a flower designed in them as a letter. Customers loved them and needless to say I sold a lot of them. I used them in the kitchen as a spoon rest or as wall decor attached by simply adding a piece of velcro. 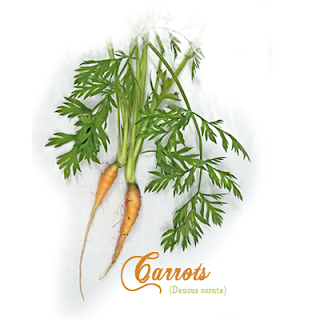 I've been using the same company for years to order them and they have been doing a great job. But now they decided to up the price to the point where I simply cannot afford to buy them and then try to ask my customers to pay 1/3 more then they were in the past.  So the end is in sight for my little tiles unless I come across another company to make them for me at a low price without having to order 500 of each or put in a huge investment and make them myself. Which of course steels my creative time.

So I'll keep searching for another avenue to purchase them. And if any of you know of a place, then please let me know.

All the images will still be available on note cards. I will continue to make new ones like "Carrots" in that another company will come along.

Posted by Unknown at 4:58 AM No comments: 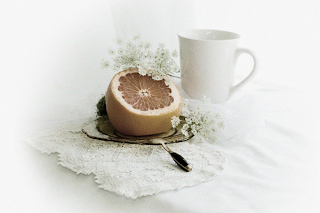 This morning, while fixing breakfast I got to wondering what it would be like if I were born just 100 years earlier. Would all this fresh produce be available to me? Fresh blueberries from Chile, oranges from Florida and cantelope from who knows where. Would I have to had canned it all last fall and bring it out as a treat on these cold winter days? Will my grandkids even know what home canning is all about?  I sure am gratefull for all the advancement the world has made since my grandmother was a small girl. I now couldn't imagine going to the store and not finding my favorite part of the grocery store, fresh produce.
These cold winter days are excellent for setting up shop to take pictures for food still life.

Above we have grapefruit and lace. I love to combine antiques with flowers. It portrays a quiet, relaxing, feminine moment from times past. I strive to make you want to take that much needed break to relax, savor and enjoy the moment. Cheesecake and Bluesberries and Yellow pepper below.
And the best part of doing food still life? You have to eat the leftovers. 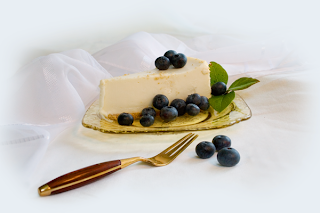 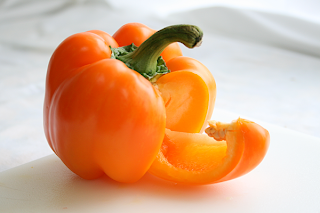 Check out my Heirloom Gallery

Posted by Unknown at 5:51 AM No comments:

Thomas and Mary Westcott lived at Westcott manor in Marwood, Devon , England in the early 1400's. They had two boys, Thomas and Stephen who would often play in the woods and gardens. One day while playing hide and seek they stumbled upon a tiny little village of garden fairies.
Garden fairies live hundreds of years and if they like a family they will stay with them forever. This village of fairies has been with the Westcotts since they met Furbert De Wescote in 1175 when he was  a young boy in Exeter. 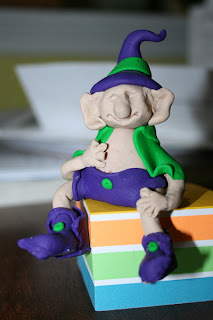 Now the garden fairies don't usually show themselves to the families they live with but Thomas and Stephen were so much fun to watch that the garden fairies enjoyed seeing them play. They both had a wonderful imagination and the fairies were very entertained.

Clover Hailleaf has been telling me the stories of both his and our ancestors being together for 23 generations. And soon their knowledge will be passed on to Dawson and Avery, my grandchildren.

He and his wife Gossamer have taken a liking to the new atrium in my living room. I've taken them in from the cold gardens Only you have to look very fast for if they think you are looking at them, they freeze and look like stone.

Well, I better get back to work with my clay. Gossamer is asking for me to build them a home.
Posted by Unknown at 6:05 AM No comments: 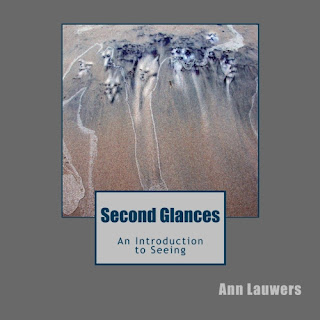 I really thought that 2011 was going to be my slowest year since An Artist View Photography started. With the economy as slow as it has been, I've been avoiding doing art shows. There were lots of lookers but unless you were selling food, there were just not enough buyers to pay the rent.
But then it happened, one day over lunch with a friend. We got to talking about publishing books. POD's they call them. Publishing on Demand. Which means basicly....you do everything yourself. You write it, edit it, design the layout, buy the books and promote them all by yourself. Yep, lots of work.
I took on the writing of Second Glances, An Introduction to Seeing. It's a pictorial book about my Second Glances photographic collection. Second Glances started on the beach at East Tawas State Park in my home town of the Tawas Cities. While on the beach taking pictures of the sunrise I came across a really cool design the colored sands were making with the waves and just had to take pictures of it. Later I discovered the awesome designs within the sand design. It contained faces. Lots of them. That is when the game began for me. Every since then, I look just a little closer to designs in nature. You would be amazed at what is there, just by taking that second glance. And that is what the book is about. Showing you how to see the images within the designs of ordinary things.
So now that the book is published and is available through my web site, www.anartistview.net, Amazon.com, Barnes and Nobles or any other book store, book signings are my next big adventure. Where do I start? What do I do now? Well, today I'll start by putting it all in motion. My first step, making a list of book stores and libraries in my area. Then I'll need a flyer designed to mail to all of them as an introduction. I have a feeling the writing of the book was the easy part.
Join my along my journey and be sure to post your suggestions of stores near you. It's always nice to see a familier face.
Posted by Unknown at 10:29 AM No comments: